Many modern lab professionals owe a lot of thanks to Karl Landsteiner. In the early 20th century, Landsteiner was credited with identifying blood types. 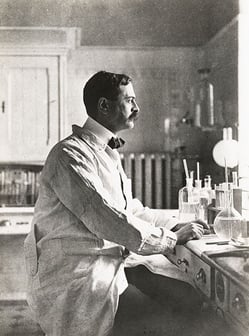 While still a student, Landsteiner connected the influence of diet on blood composition, something that is still in use today. Need to cut back on salt or cholesterol in your foods? You can thank Landsteiner for starting the research that made that connection.

After graduating from the University of Vienna, he discovered three different blood types, that he labeled A, B and C (now O). During his research, he was able to determine that people with the same blood type could receive blood from others, leading to the first successful blood transfusion in 1907. Before that, no one knew whether a blood transfusion would be successful.

His research didn't stopped there. In 1937, his continued research on blood types uncovered the Rhesus factor, making blood transfusions even safer. This information, as well as general blood typing also began being used in paternity cases.

Through his later research, Landsteiner was able to isolate the virus that causes polio. This researched allowed Jonas Salk to create the polio vaccine, which is still used today. Landsteiner is now listed as one of the pioneers responsible for eradicating polio at the Polio Hall of Fame in Warm Springs, Georgia.

In 1930, Landsteiner was awarded the Nobel Prize Medicine/Physiology. His other awards include the Cameron Prize for Therapeutics of the University of Edinburgh and a posthumous Lasker-DeBakey Clinical Medical Research Award. Landsteiner died in 1943.